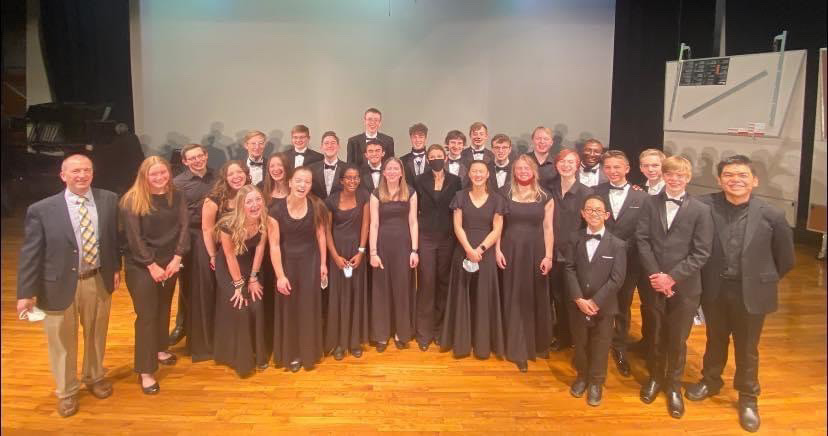 This picture depicts those accepted into the All-City Band, another selective group that has already performed in concert. Since All-State Band has not taken place, there are no current pictures of this group.

The Colorado All-State Band is an audition-based group that get the opportunity to travel to the University of Northern Colorado and play with other musicians across the state. Among those accepted who were accepted are eleven students from Palmer Ridge High School! In no particular order:

All eleven of these students were recognized as some of the best players of their individual instruments in the state of Colorado. The rigorous audition process makes this accomplishment even more impressive. “…[we] had to prepare two ‘musical etudes’ and scales and record it all in one take,” said Laura Lambrech (12), an oboe player of eight years.

“… We received the audition material around May of last year, and we had all summer up to around Thanksgiving to prepare for the audition,” said Grace Lusk (11), a saxophone player of six years. “…this year…since there are still some COVID-19 restrictions, we had to record the audition from home. “

The Palmer Ridge Band Department, led by Mr. Butch Eversole, has contributed a great deal to these students’ success. “The band department here has definitely helped prep me for things [like this]… For wind ensemble, Mr. Eversole uses the audition material [for All-State band] as our chair tests… He also helps prepare us by giving certain warm-ups that can help with a lot of different techniques that are needed in… difficult pieces,” said Lusk.

The students were also helped along by the supportive band community at PRHS. “I have continued band because of the awesome community that comes with it,” said Lambrech.

“My friends in band are basically like my family, I wouldn’t trade them for the world,” said Lusk.

Congratulations to the eleven Palmer Ridge students in the Colorado All-State band!