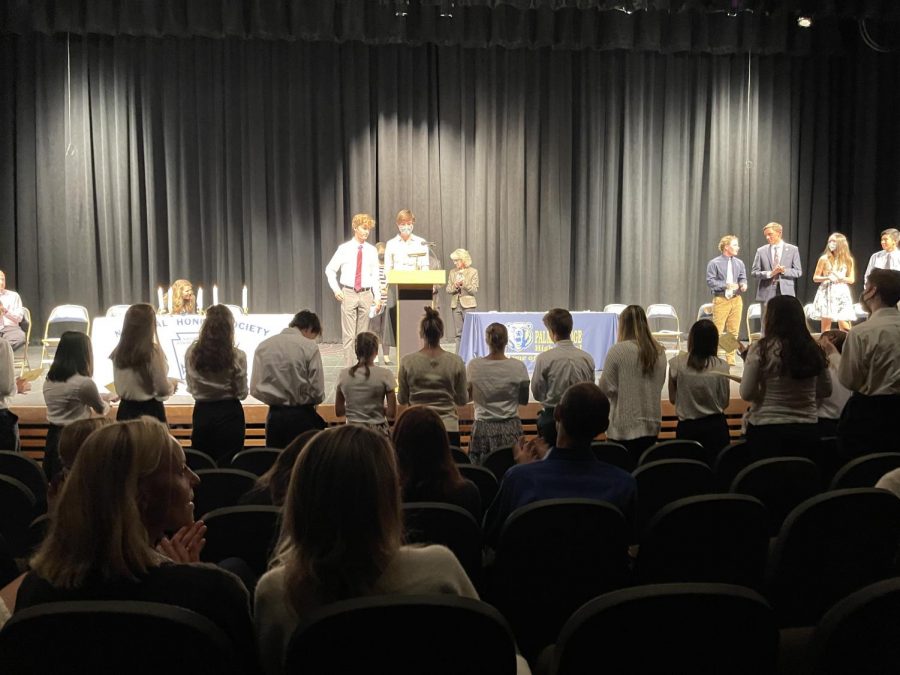 The National Honor Society (NHS) is a prestigious organization that recognizes high school students all over the nation for their academic achievements. The organization also recognizes students for their outstanding character and willingness to provide service to others. Palmer Ridge High School’s NHS chapter is responsible for many activities, such as the blood drive and collaboration with Trunk-or-Treat, a student-hosted activity where kids from Monument can trick-or-treat from car trunks representing high school clubs and student organizations.

On October 11, the current and new members of NHS gathered in the auditorium for a formal induction ceremony. Many parents, students, and faculty were in attendance on Monday night, all very eager to see the new generation become a part of the current chapter. Due to the prevalence of the Covid-19 pandemic last year, the inductees of last year’s class were also honored, each receiving their respective letter and pins, as well as a few seconds of recognition as they graced the stage.

Because the induction class of 2020 never got their moment, one current member expressed their opinion. “It never really felt like we joined NHS because the induction [from last year] was over Google Meet,” said Hannah Hermann (12) in regards to her experience. “But all of the seniors made us feel welcome at the meetings [last year]!”

The ceremony started off with head adviser Leslie Lantz, a science teacher at Palmer Ridge, explaining in detail the purpose of NHS, as well as introducing the Executive Council of NHS:

In order of appearance: Zoe Johnson, Lance Anderson, Bailey Gargasz, Ben Carlander, Amber Wright, Caden Chau, Jevan Wiltz. Each member of the NHS leadership council played a part in the ceremony, introducing the pillars of NHS and leading the induction.

Next, principal Dr. Frank said a few words, and expressed his remarks towards the chapter. After a few routine announcements, such as the previous chapter’s accomplishments and basic introduction, Parliamentarian Ben Carlander began to introduce the Four Pillars of NHS. The Four Pillars, consisting of Scholarship, Leadership, Service, and Character, essentially make up what NHS stands for as a whole, as well as what they represent. Historian Jevan Wiltz, a senior at Palmer Ridge High School, was spot on with his speech on the pillar of Character.

The quote, “Character is who you are when no one is looking, but revealed when pressure is applied.”, which Wiltz featured in his speech, truly stood out to the inductees. The idea of character being present at all times, but truly shining during times of need, is something inspirational that many people are the beneficiaries of. 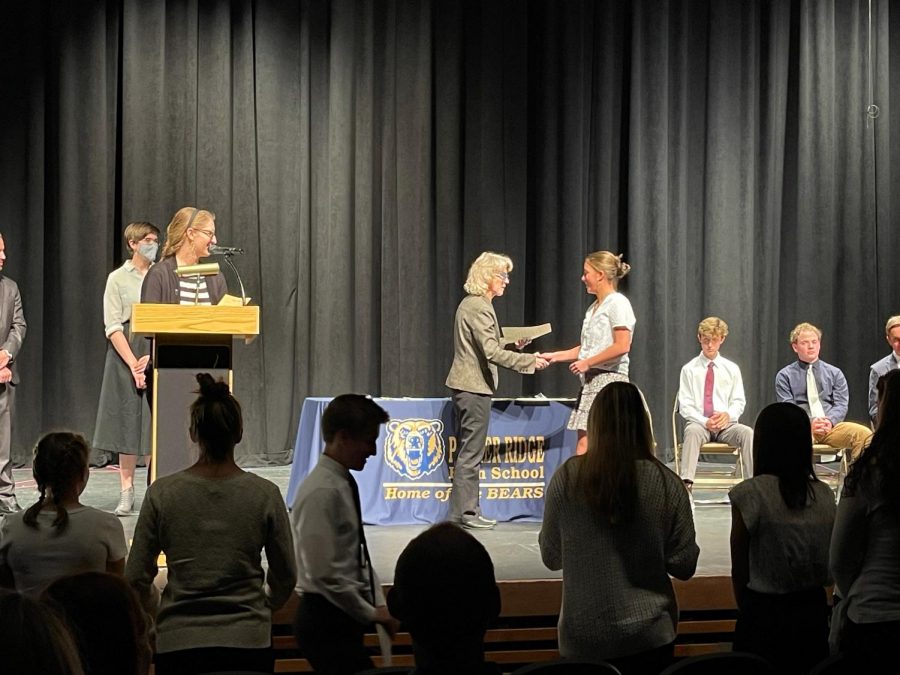 Emily Miller (11) receives her pin and certificate. Each inductee received a certificate of membership and either a letter or a pin to celebrate their accomplishment of qualifying for NHS.

At last, the moment the new inductees had been waiting for arrived. All twenty-seven students recited the official pledge of NHS, were recognized in front of the whole auditorium while they received their certificate and pin, and sat back down in their seats as worthy members of NHS. Emily Miller (11), was extremely excited to take part in the ceremony and is optimistic about what the new members can bring to NHS.

“I’m very excited to tutor my classmates, as well as take part in the new projects this year,” Miller said. “I’m looking forward to serving my community and getting to know the other members of the chapter better!”

With strong leaders, new ideas, and a bunch of new members, NHS can not wait to get started! Leading up to the chapter’s very first meeting on October 22, President Zoe Johnson expresses her goals for the NHS this year.

“We have got a great new group of inductees and I am definitely looking forward to a great year of more normal activities helping our community,” Johnson stated. “I’m so proud that last year we still managed to focus on serving our school community. but this year I think we have a great chance to return to a larger role serving in our broader community.”

Taking part in NHS is not something to take lightly, even though it may sound like a heavy load. All members are required to maintain certain expectations in order to stay off the probation list. The students must meet all requirements when it comes to service hours, maintaining their GPAs, and continuing to raise the bar for their portrayal of character. Establishing oneself as a member of one of the most respected organizations in the nation can inspire confidence and ignite a flame for academic excellence. Being a member and giving yourself freely as a service to others builds character and encourages greatness. Even though this year’s program just began, the new members of NHS are already rising up to the challenge!