Give Blood, Give Back 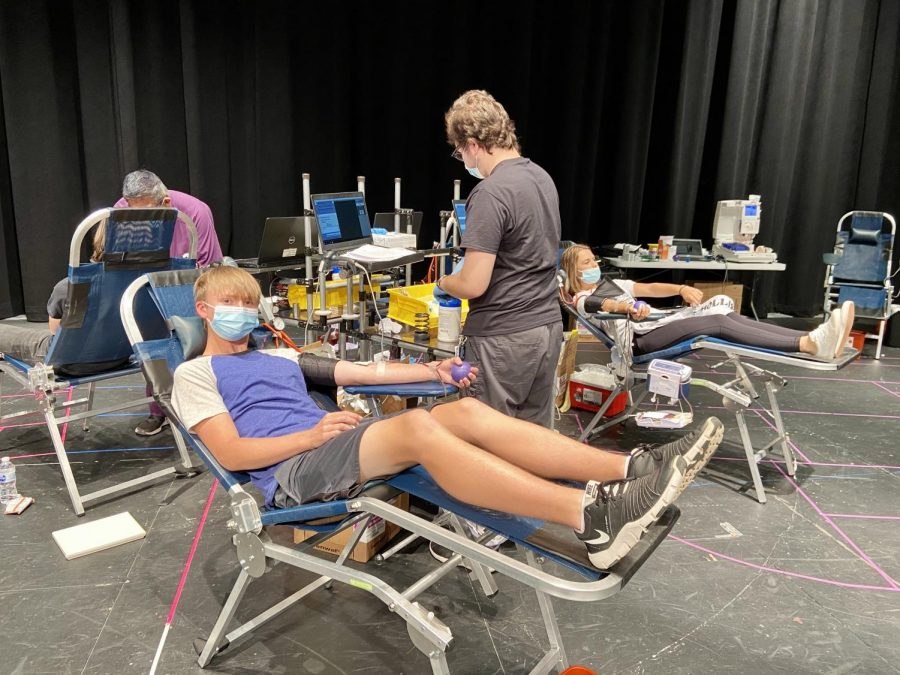 Todd Osborn (11) donates blood and gives back to his community.

Most clubs and organizations hold bake sales, food drives, or festivals to give back to the community. PRHS’s National Honor Society chapter has chosen a different approach. On October 1, 2021, NHS partnered with Vitalant to host a blood drive for students and parents in the PRHS auditorium.

Each year, the NHS hosts one blood drive in both the fall and the spring, where students can reserve a time to donate blood. The NHS works with blood donation center Vitalant, which provides equipment and the trained phlebotomists who draw the blood. Vitalant blood bank acts as a middleman between donors and hospitals, collecting blood of all types and subsequently supplying local hospitals with much-needed blood for patients.

This year, Amber Wright (12), the NHS Director of Community Service, coordinated and ran the October 1st blood drive. “Organizing the fall blood drive falls under my responsibilities, which I was very happy about– it was part of the reason I ran for that position, because I ran the blood drive in the spring as a junior,” said Wright. 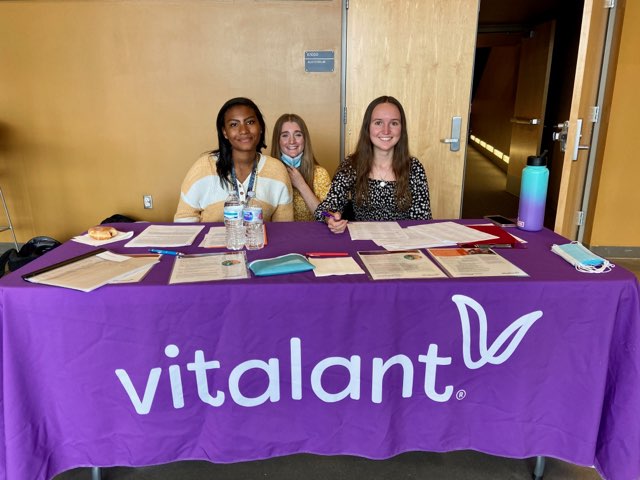 Amber Wright (12), right, the NHS Director of Community Service and the coordinator of the blood drive, runs the check-in table along with volunteers Amaya Taylor (11), left, and Gwen Engberg (11), middle.

The blood drive took place in the auditorium, with the donation beds and recovery area set up on the stage and waiting donors sitting in the seats below. “The auditorium stage is the only place that we can hold the blood drive, so we had to plan the date so that they [the theatre company] wouldn’t start constructing the set for the next musical, and so that’s why we had to choose October 1, even though that’s the day of the Homecoming Assembly and… football game,” said Wright. She had some trouble with donors cancelling or rescheduling their appointments due to the assembly happening at the same time as the drive; however, all slots that were cancelled were quickly filled in by other willing participants.

“[As compared to last year], we had the same number of spots for the blood drive… 49. I would say that I had a similar number that I actually admitted– more walk-ins this time, but each time we signed in over 50 [people],” said Wright. In the last two years, Covid has played a strong role in interfering with the blood drive. In 2020, the autumn blood drive was cancelled and the spring blood drive was modified to fit Covid safety guidelines. That being said, this year’s only remnant of Covid precautions were that masks were required to worn in the auditorium and while donating. 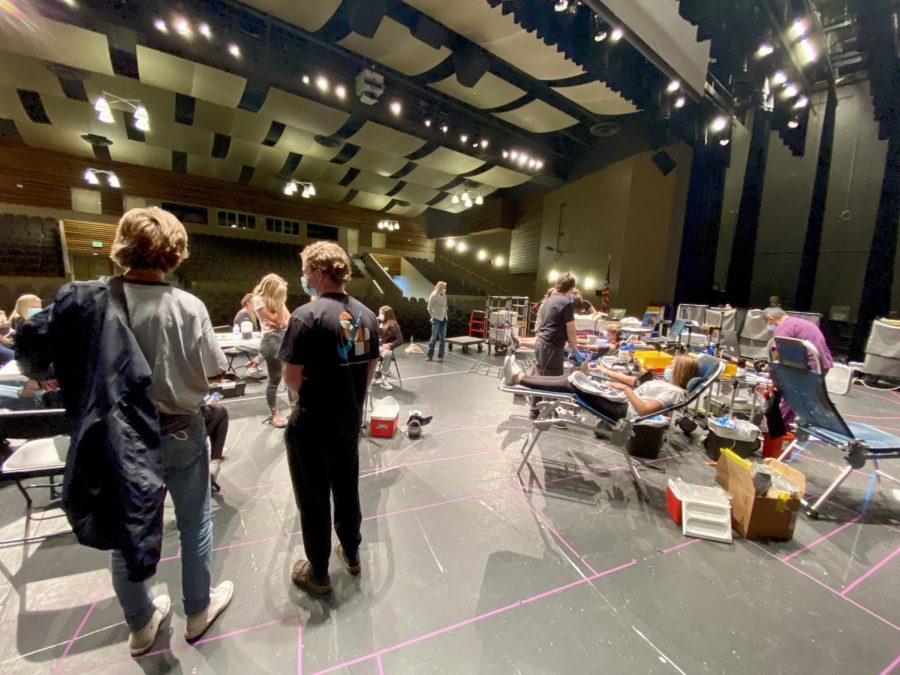 Students donate blood, eat snacks in the recovery area, and keep an eye on the donating patients.

Even with slight variations to the normal procedure, the blood drive concluded as the most successful blood drive in the history of Palmer Ridge. Vitalant was able to collect 51 units of blood, far exceeding their initial goal of 33 units for this blood drive. Wright saw far more enthusiasm in donating than expected: “We took a lot of walk-ins… we went over our maximum of 49 slots, and we warned everyone that the wait times would be longer, and people still wanted to donate,” said Wright.

One thing that both this year’s drive and last year’s have in common is that Wright had under two weeks to plan each. “In the spring [last year], we had less than a week to do the blood drive… Then, a freak storm hit, and so we were only in school for two days before the blood drive, and so not much time for in-person advertising, and so I set up a Remind to get people signed up… So the nice thing about the blood drive this fall was that I was able to use that Remind again and have all the same people from before, then add new people to the Remind as they were interested. I made a Sign-Up Genius… and put flyers around the school, had NHS members hand out flyers [before school for] two days, and got an announcement, got a push email, and just told everyone I knew about the blood drive.”

Wright has plans for the spring blood drive, which is predicted to top this year’s blood drive, as more slots will be available for people wanting to donate. “It was really great seeing people willing to wait, but we want to make sure that it’s more convenient for people to give blood here… Now, we’re going to have another phlebotomist next year, so that means that we’ll have 25 more slots that I can definitely fill,” said Wright. 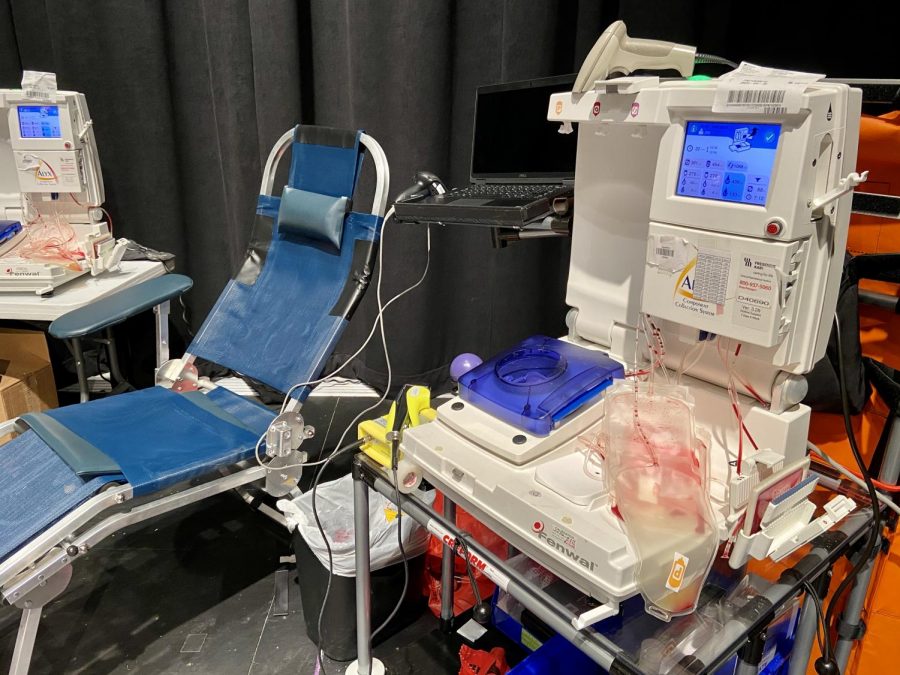 According to Red Cross, “approximately 36,000 units of red blood cells are needed every day in the US.” Vitalant provided the equipment needed to donate blood, including special chairs and machines to pump and return blood and platelets.

Some students raised concerns about donating blood, as many are scared of the needles, of seeing their own blood, or at the predicted pain of a needle being inserted in their arm. Rest assured, however– the actual pain during the procedure is quite minimal, and though pain tolerance ranges between each patient, it is typically the same pain as a papercut or less (though it doesn’t sting).

“That fear is perfectly normal. I know for myself, the first time I donated blood, I was a bit nervous about how I was going to feel about the pain, so I would just say that [the pain] is relatively minor compared to how good you feel after donating and knowing that your blood could potentially save three lives- because they split your blood into three components,” said Wright. “[Being afraid] is perfectly natural, but there are some things you can do to prepare for it, like having a good meal the day before, drinking lots of water a couple days before, taking deep breaths when they’re actually about to put the needle in your arm.”

Wright went on to encourage anyone who feels that they can comfortably overcome their potential nervousness to donate blood.

The United States and Colorado specifically are currently experiencing a blood shortage, which can mean life or death for many patients. Blood drives and blood donations have a direct impact on saving lives. “It’s so important because so many people need blood… Every two seconds in the US, a person needs blood… So many people need it, whether it be elective surgery, or cancer patients needing platelets…” said Wright. Parents were also able to donate at this blood drive and will be able to as well in future drives.

“Right now, for a number of factors, with Covid, and then with people not wanting to leave the house, and not many people donating in general, we’re in a critical national blood supply shortage right now. That means that Vitalant in our area isn’t able to supply our local hospitals [with blood] as much as they need anymore, which means that people who need elective surgeries are being postponed because they don’t have the blood for them; they’re prioritizing people who are coming in as an emergency. It means that blood is absolutely necessary to keep the hospital running and keep the patients alive, doing well!” 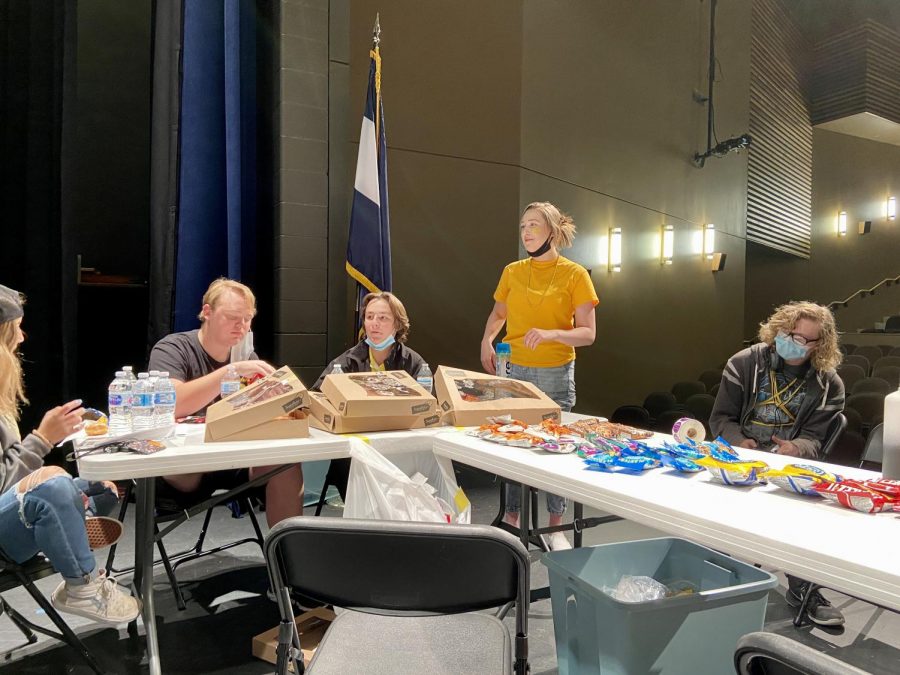 Students recover in the snack area. Donuts, chips, pretzels, cookies, and bottled water were provided by Vitalant for the donors to eat after donating.

After donating, it’s important for donors to rehydrate and re-nourish their bodies. Drinking plenty of fluids and eating foods high in sodium, such as chips or crackers, facilitates an easy recovery. NHS and Key Club members volunteered to help the blood drive run smoothly, operating in 30-minute-minimum shifts. The volunteers helped donors recover, led them to seats in the recovery area, and made sure that they did not pass out and were keeping properly hydrated and re-nourished.

“Thank you to all of the people who volunteered at the blood drive. It was extremely helpful because not only did we fill all of our slots for donating blood, we filled all of our slots plus more for volunteering, which was really great to see. [The volunteers] were keeping an eye on all the donors, making sure they were safe and that they were eating and drinking and recovering well and just keeping the blood drive smoothly… I’m just really grateful that I had so many people help out at the blood drive, because it made the world of a difference,” said Wright.

Less than 38 percent of the population meet the requirements to donate blood, but only three percent in the United States actually do donate (according to the Red Cross). Vitalant, as well as other blood donation centers, are currently in desperate need of all blood types. If you meet the requirements to donate, highly consider scheduling to donate blood. Though the prospects of needles and blood may be worrisome at first, the widely impactful benefits of donating blood and actively saving lives make up for the fear in spades.