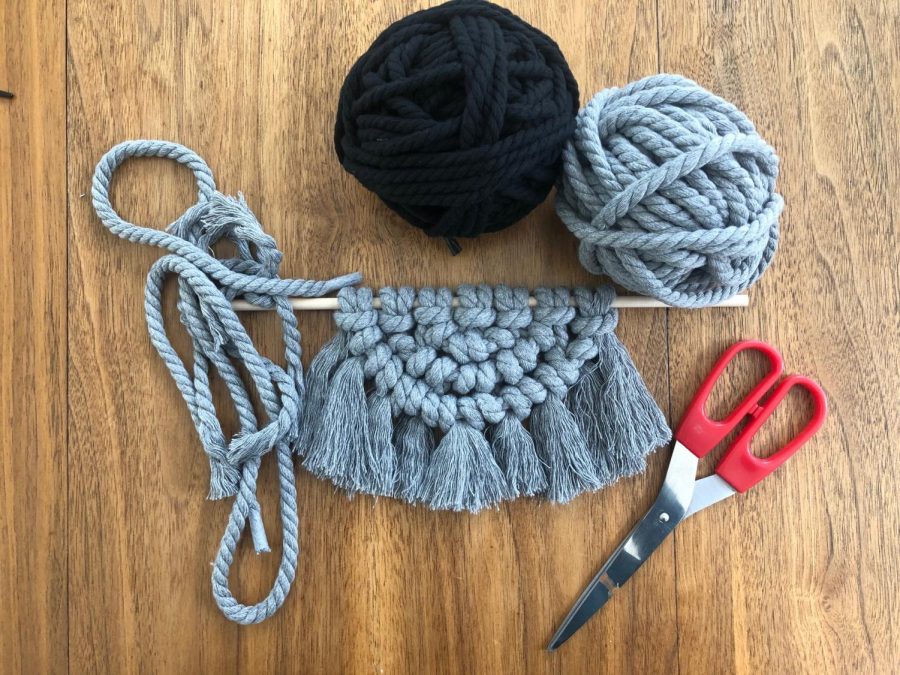 For the second installment of New Quarantine Activities, we’re taking it back to the 1970s, minus the bell-bottoms and presidential scandals. Macramé is the art form of tying a series of knots in strings, cords, or ropes to create shapes and patterns. Most often associated with the bohemian trends of the ’60s and ’70s, macramé is thought to have originated from the 13th century all the way to BC years. Through time, it traveled through the Persians, Babylonians, Arabic countries, Europe, and finally, America in the 18th century. Macramé became popular due to its minimal supplies (some form of rope and mounting ring or dowel) and the simplicity of its knots and patterns. It quickly floated out of fashion in the 1980s, but it seems to have made a resurgence more recently. Macramé hanging plant holders, wall decoration, and even keychains can be found in many a modern American household.

Finding myself quite bored during quarantine, I turned toward this seemingly ancient art to discover its nuances and (hopefully) cure my ennui. I found my supplies at Hobby Lobby quite easily and set to work immediately.

The supplies, as I previously stated, were easy enough to come by. All you need for a simple macramé piece (I chose to follow this pattern) is cord and a dowel. I chose grey and black macramé (I ended up only using the grey) and a simple 12-inch craft dowel. 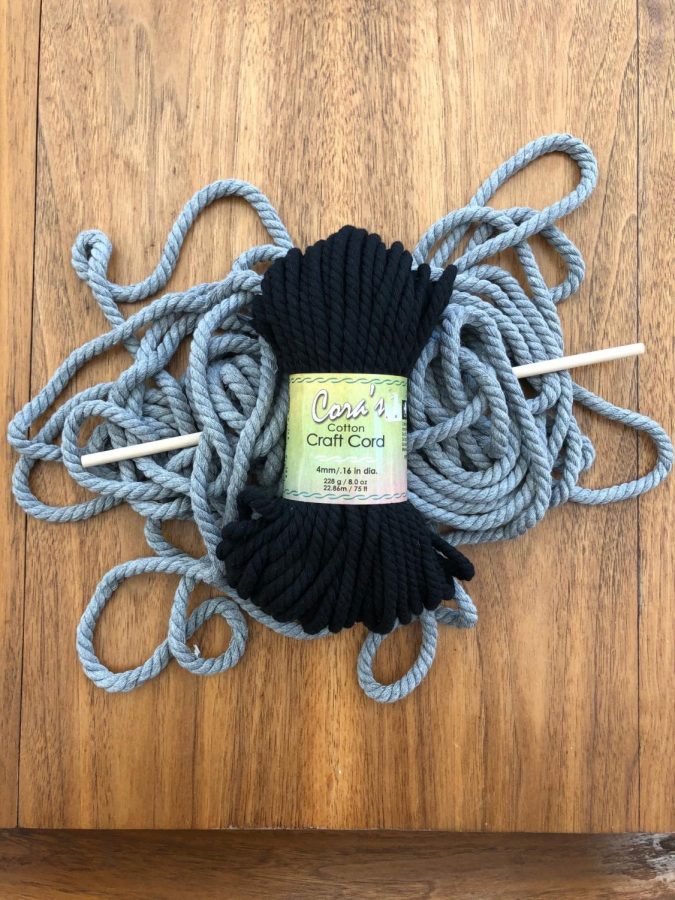 The tutorial I followed used three basic knots, as follows: 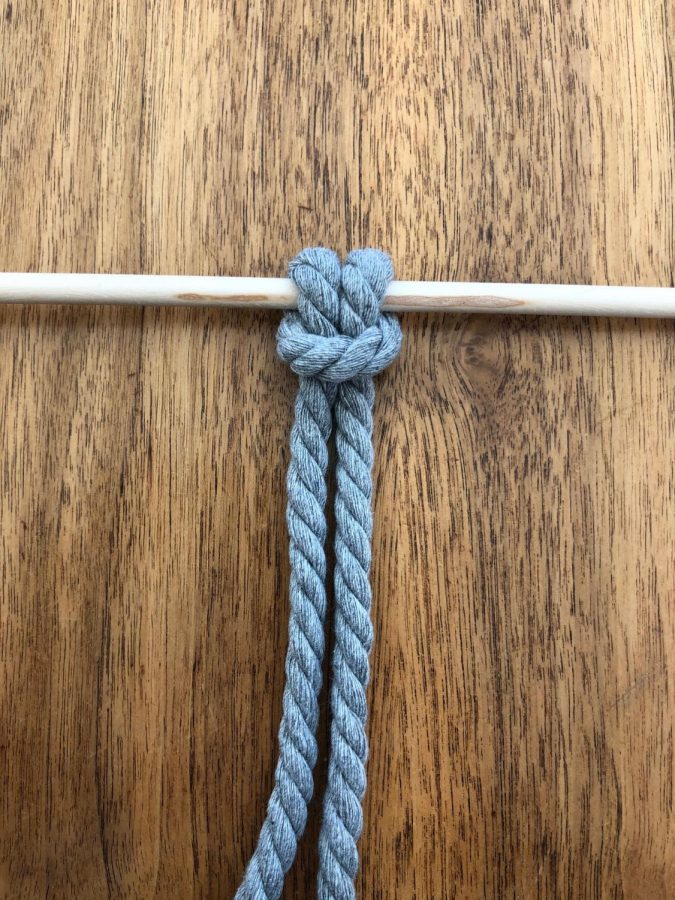 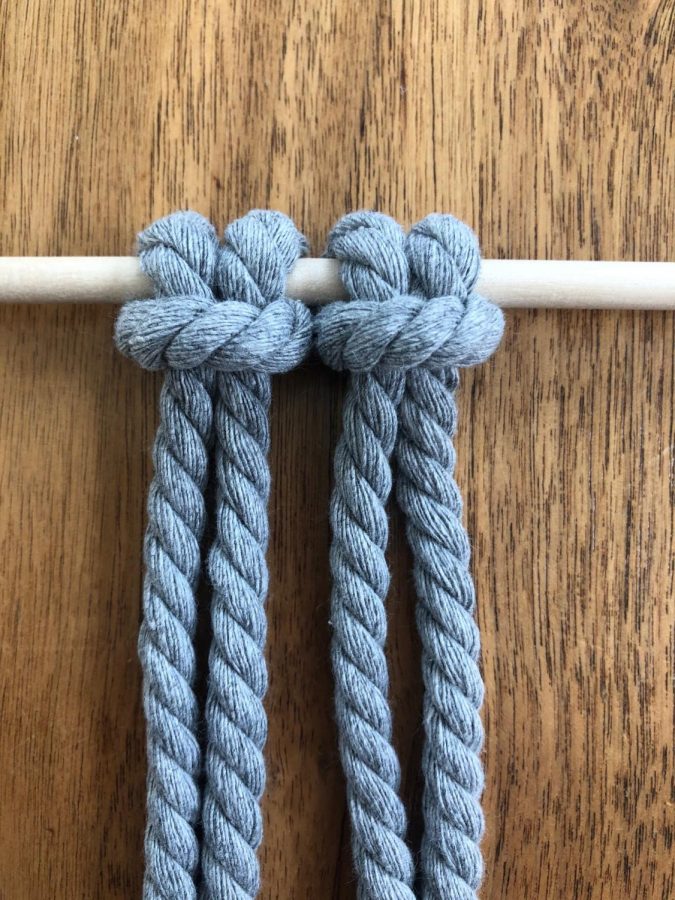 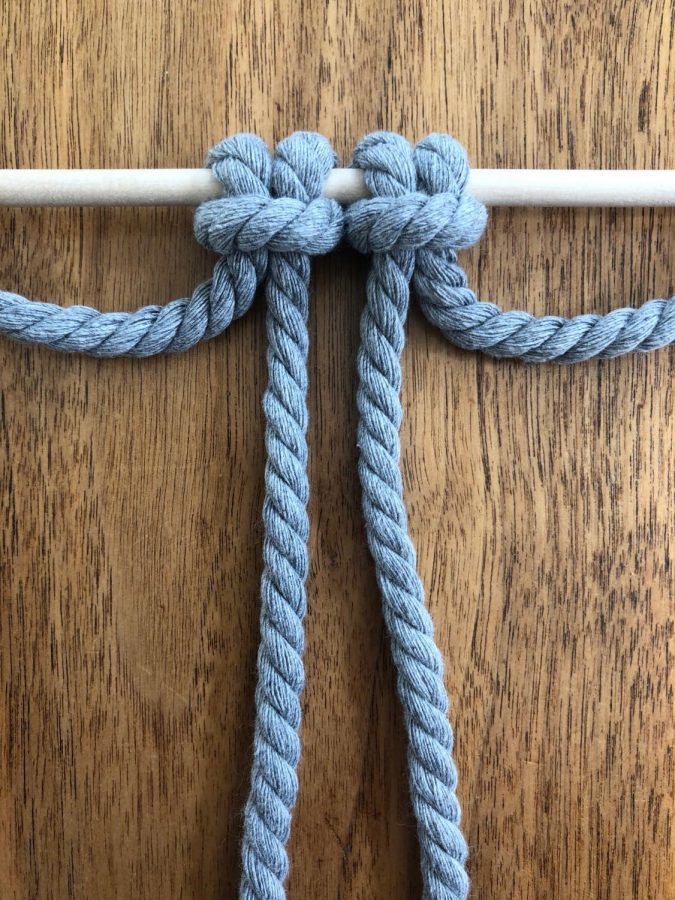 To start the knot, we’re going to use the middle two cords. The cord on the left is our holding cord, or the cord that the rest of the knots with the other cords will be tied onto. 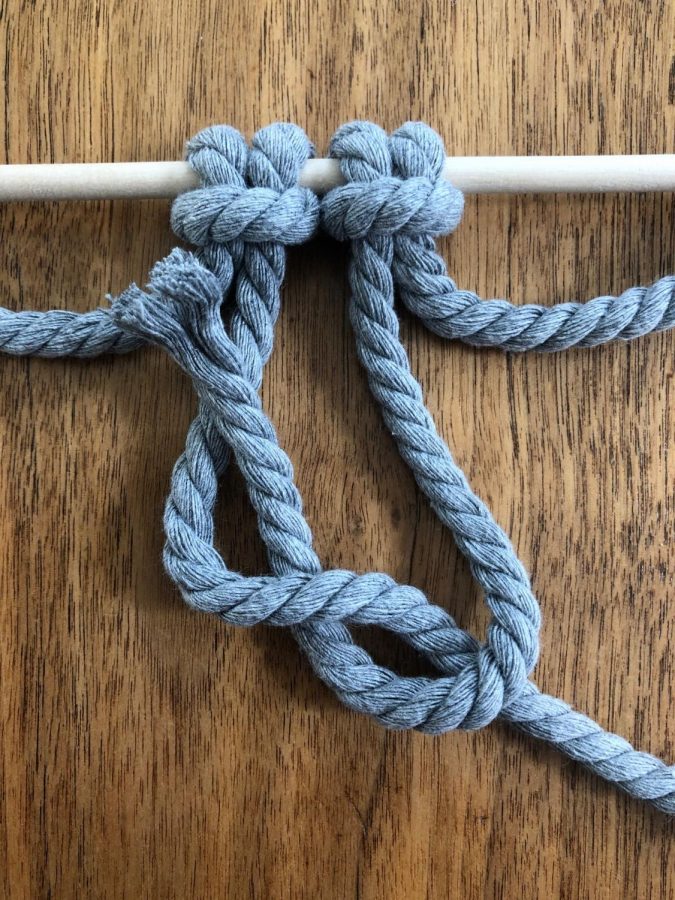 Tie the right cord over and through the holding cord, as shown. 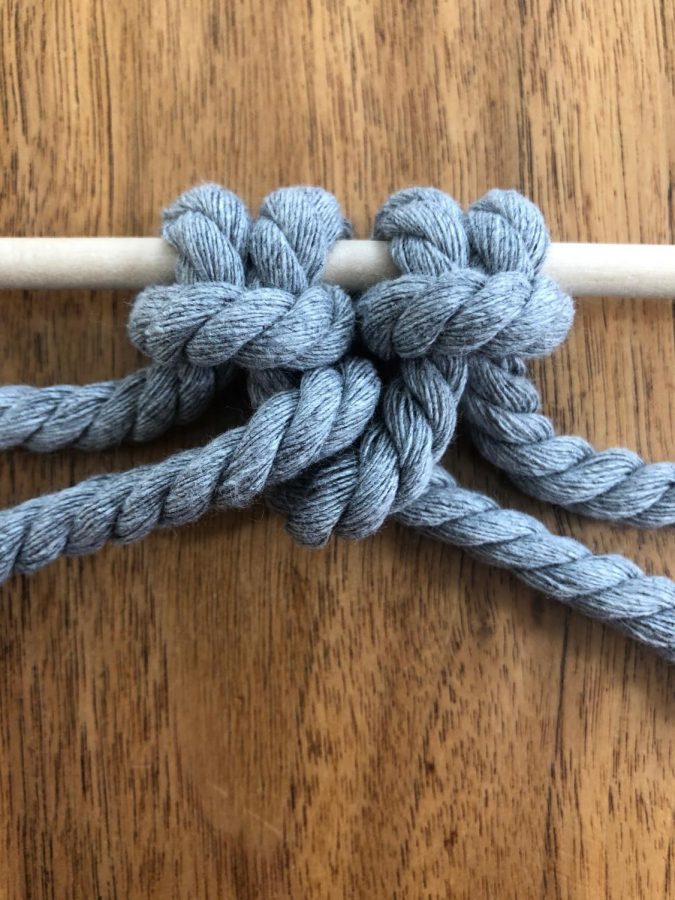 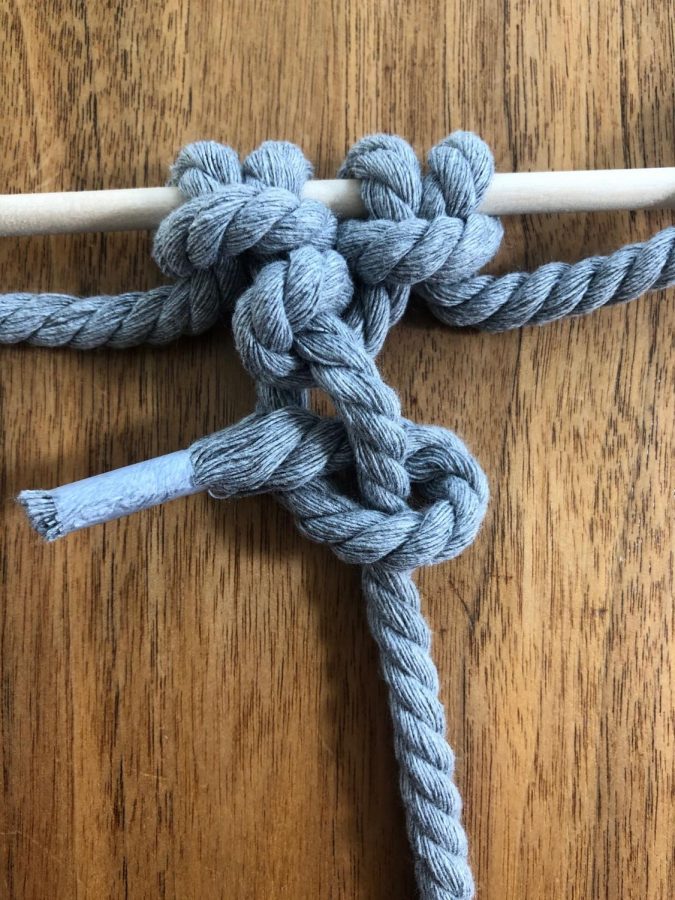 For the double part of the double half hitch knot, loop the now-left-hand cord over the holding cord and through the loop made, as shown above. Pull tight. 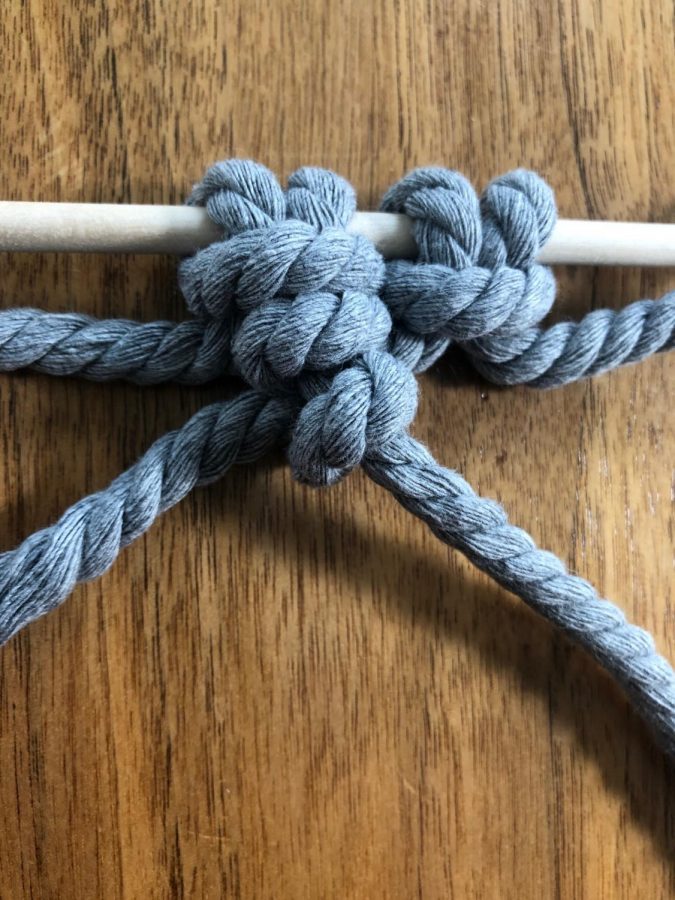 Your knot should look like the picture above, with three rows of cord on the holding cord. 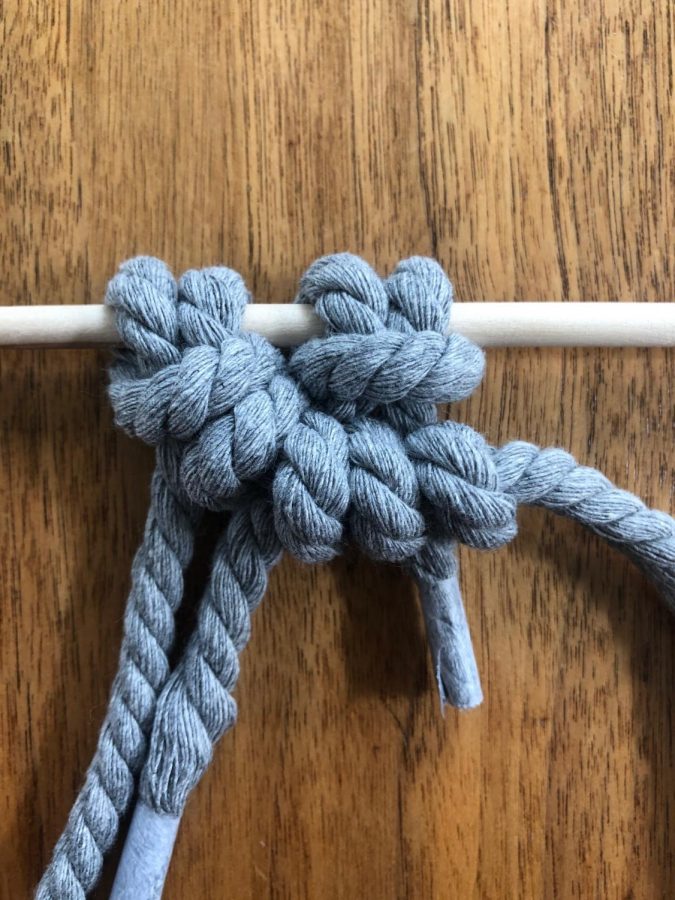 Repeat the same process with the last cord (the one we set aside on the right). 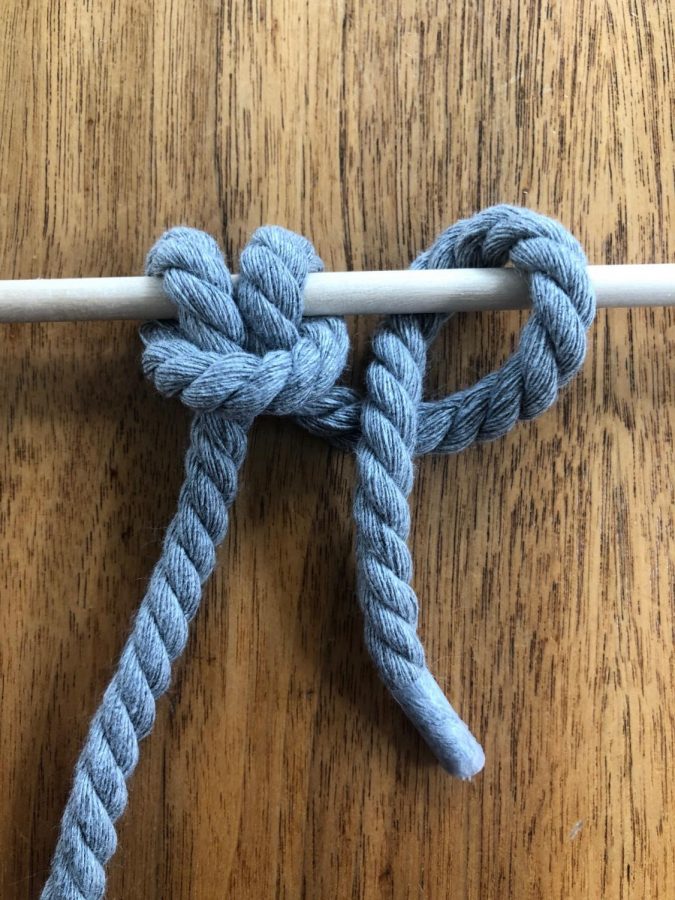 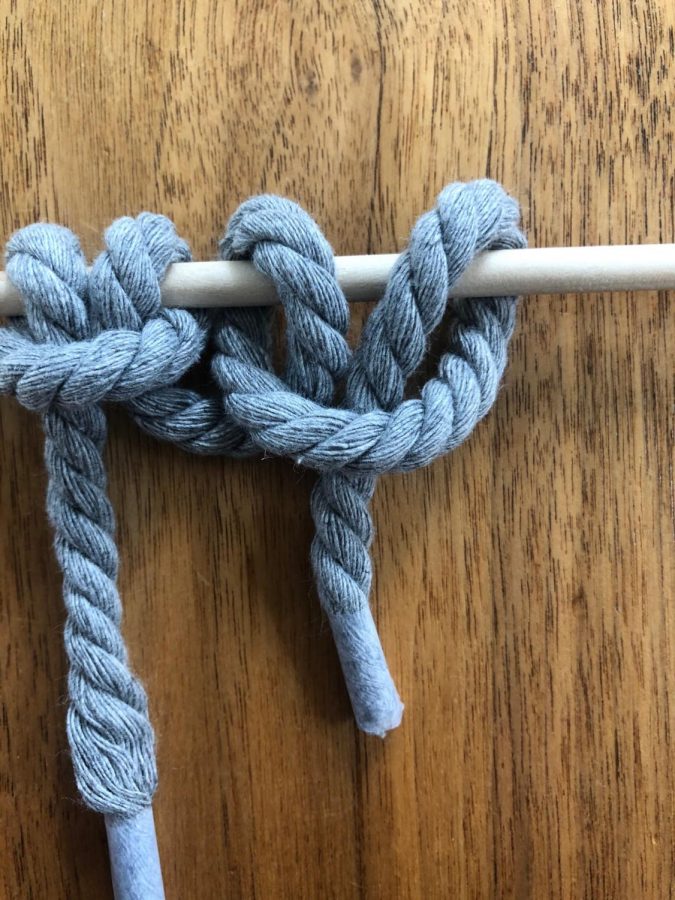 Next, loop the end of the cord under and over the dowel, then through the loop made (it’s the opposite of the first step). 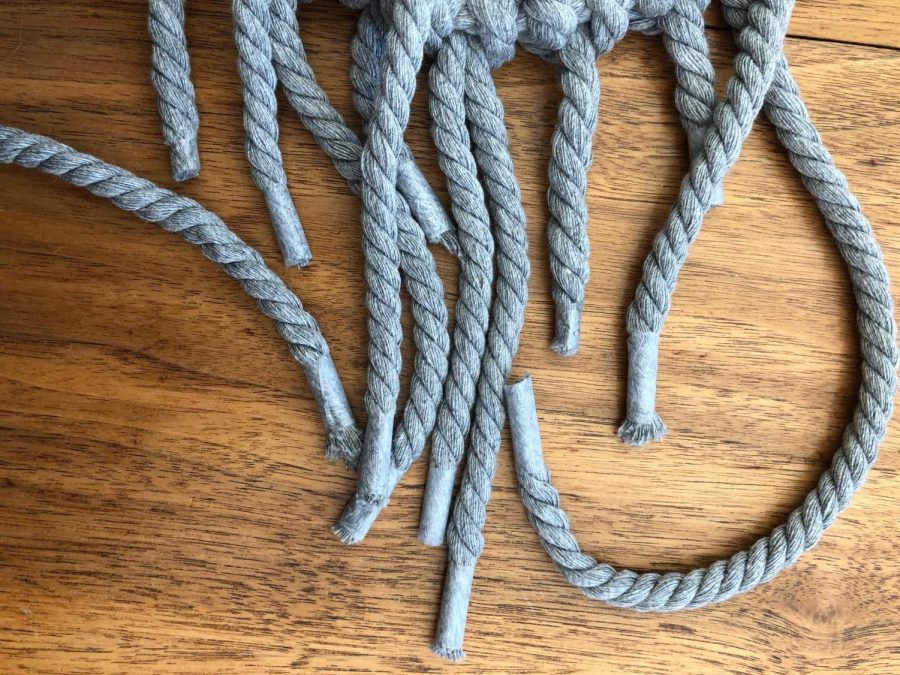 To start off, I cut all of my cords beforehand and taped the ends so the fringe would not impede my knot-tying. 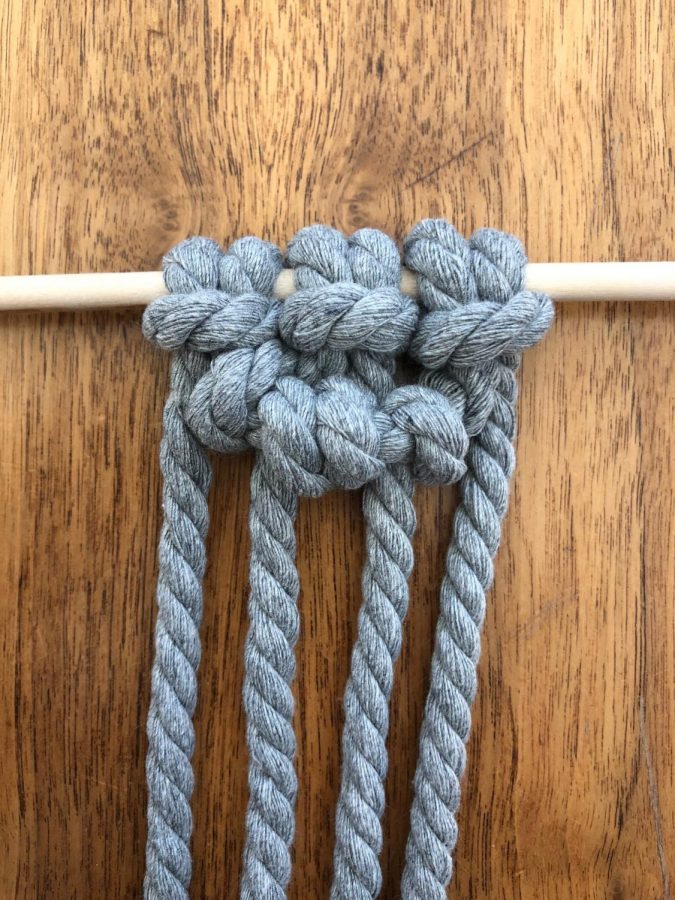 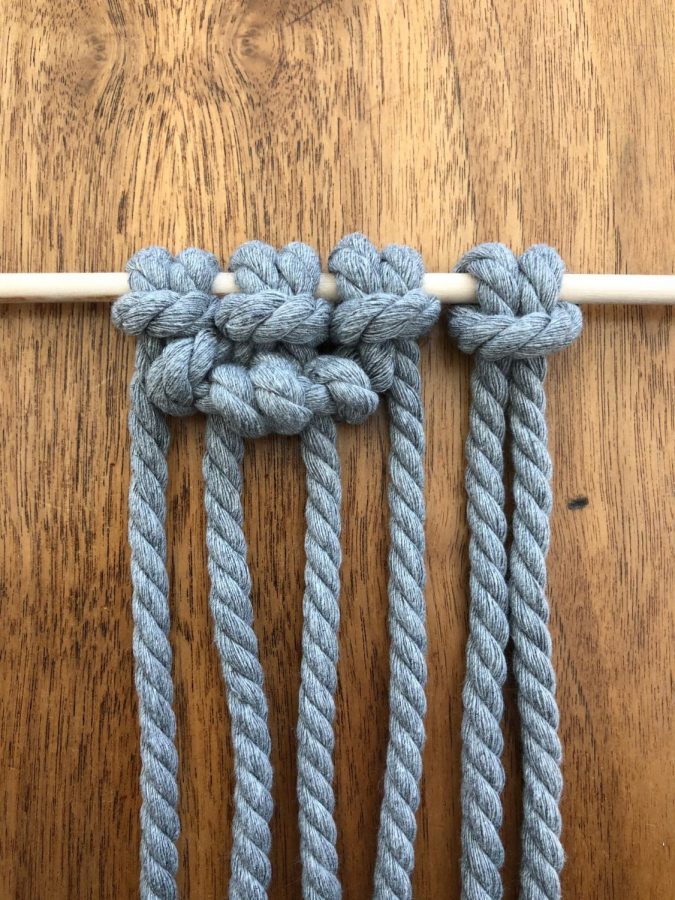 I then attached another 40-inch cord to the dowel using a lark’s head knot and tied double half hitch knots right to left across all the cords. 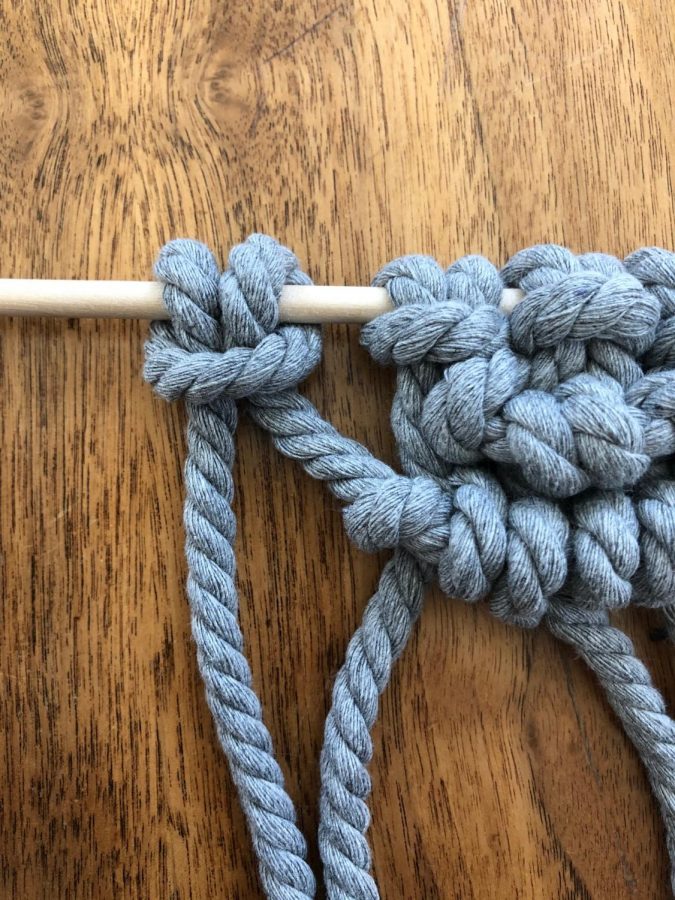 Once again, I tied the holding cord to the left of the piece with an attached lark’s head knot. 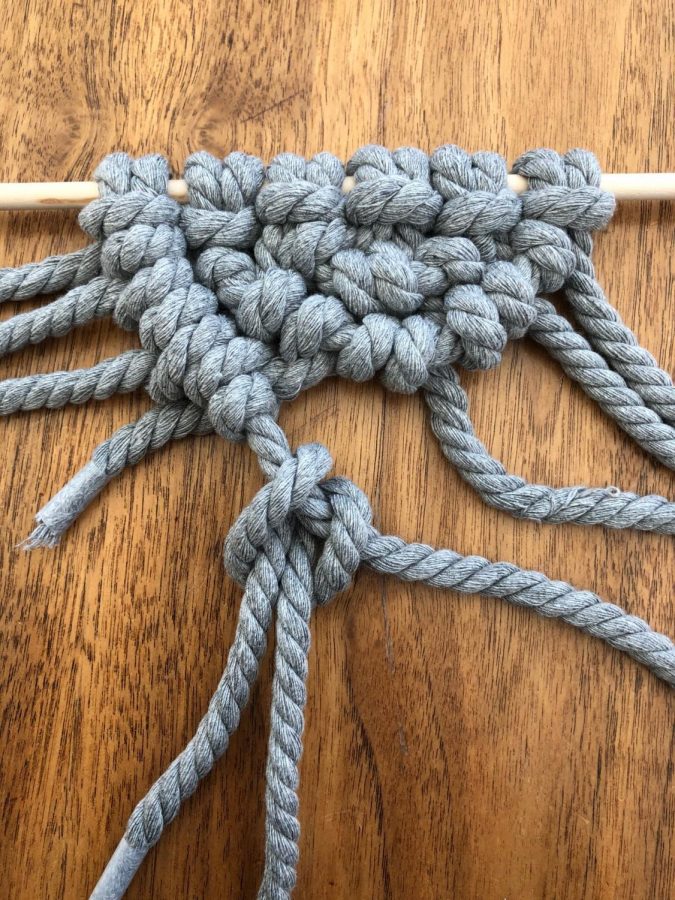 I attached another 40-inch cord to the right of the piece and tied yet another row of double half hitch knots, left to right. Halfway through (after three knots), I tied a 30-inch cord to the holding cord with a lark’s head knot. 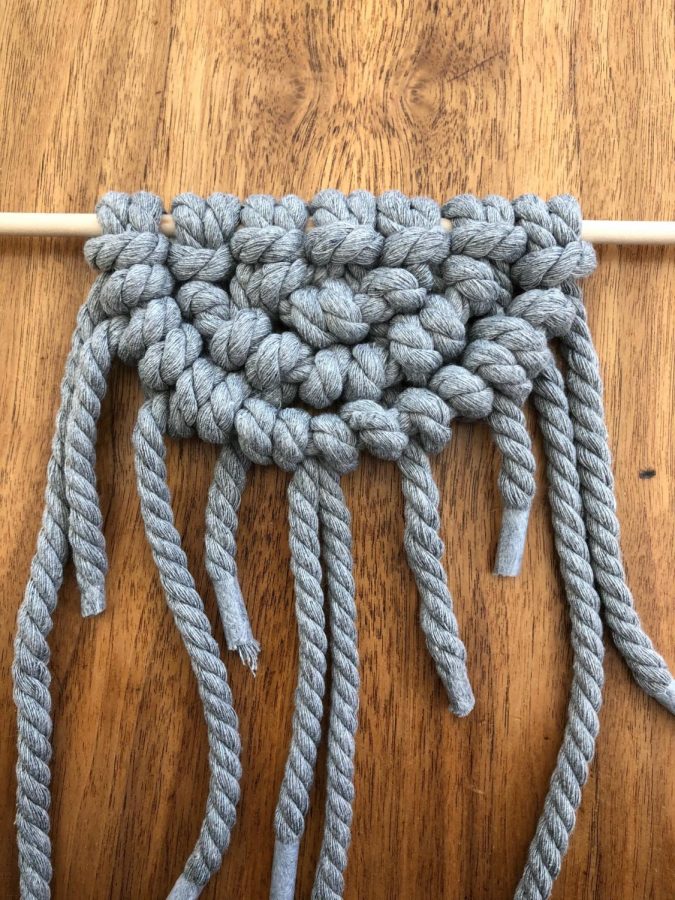 Since the cord I was using was thicker than the cord in the tutorial video, I only did three rows of knots, while the tutorial showed four.

Next, I trimmed the ends of the cords to approximately the same length. 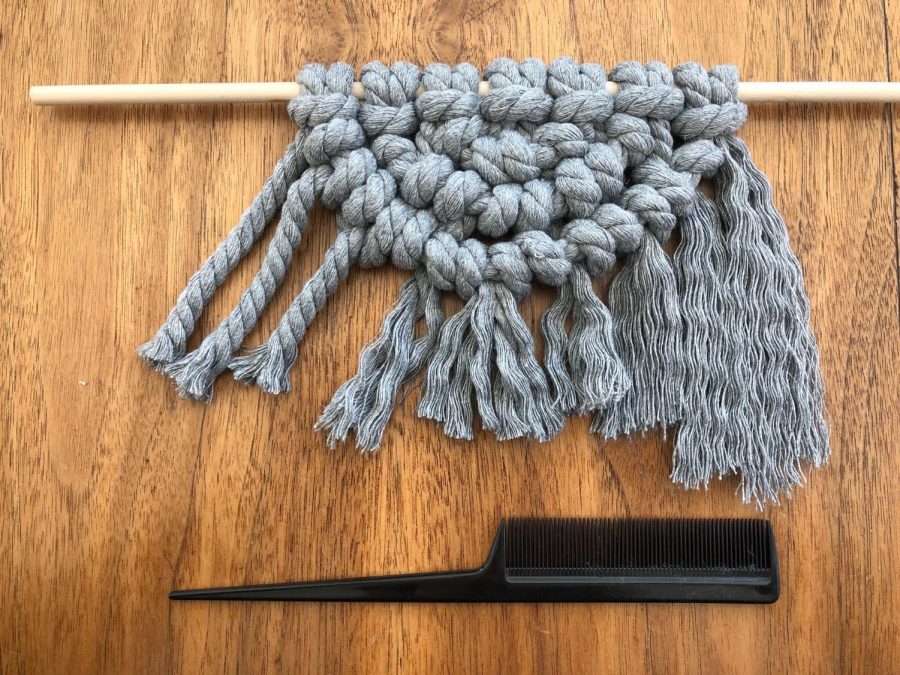 I then proceeded to use a comb to separate the threads of the cord into a fringe and trimmed the threads to match. 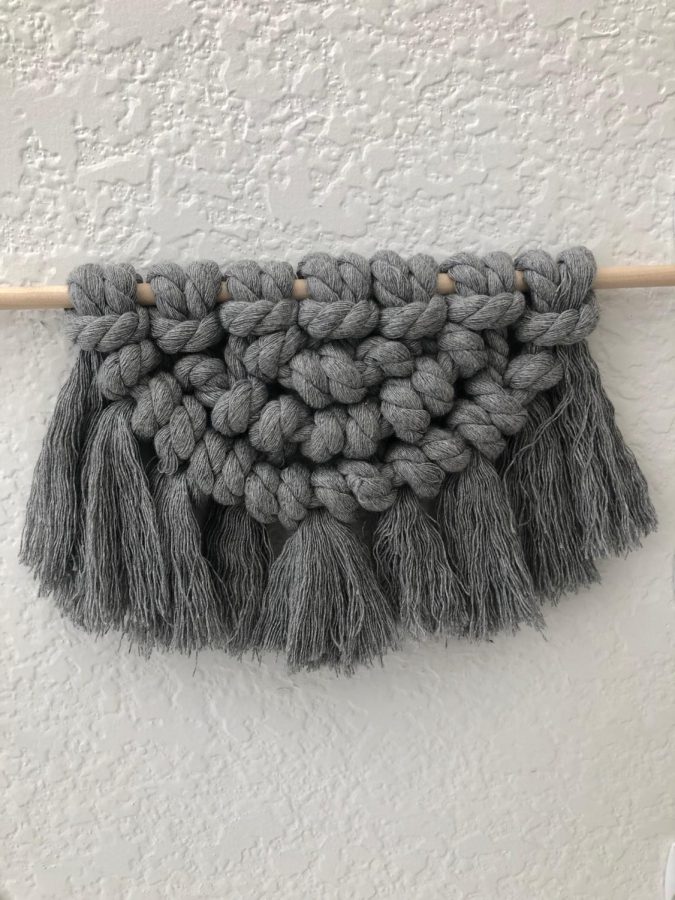 The end product turned out much nicer than I hoped! It took a few tries to nail the double half hitch knot, but the work paid off. I ended up with a very cute decoration that is perfect for one’s wall or a gift for a friend. In the future, I think having some macramé skills on hand will be very beneficial, whether it’s making a custom (or last-minute) gift for Mother’s Day or tying a secure (and aesthetically pleasing) knot in the rope that I’m using to piece my survival shelter together in the middle of the desert (or something like that).

To follow the complete tutorial, visit this link: https://www.youtube.com/watch?v=esj92LnRrhs